A cutting-edge 30-panel solar cell array and battery storage system has been installed by Procast at Strathaven Airfield to reduce its reliance on national grid electricity and improve its environmental credentials.

It’s the first move towards energy independence by the airfield, which will benefit from having at least 46 per cent of its energy – and up to as much as 90 per cent – self -generated via the photo-voltaic system that has been installed on the hangar roof.

Funding for the £15,000 project came from the Scottish Government’s Community and Renewable Energy Scheme (CARES) and South Lanarkshire Council’s Renewable Energy Fund, so Procast had to provide a competitive tender.

And while the installation of the solar panels and associated battery control system took only four days, there were many weeks and months of planning and form-filling prior to the company getting on site.

The overall aim of the project was to harness the energy from hangar PV array, use the generated power on-site and store any excess for use on demand, thereby reducing costs and environmental impact.

For example, many airfield staff members and customers have electric vehicles, so this will help offset charging consumption.

The array is expected to generate a minimum of 8500 kilo-watt hours of electricity. When the site is producing more power than required, the system will trickle-charge the battery storage system.

With clever load-balancing, the stored power can be appropriately distributed to allow the airfield to move towards self-consumption as much as possible.

He said: “Procast came top of the quotes on both price and all our other value assessments. Yet Paul and his team still managed to exceed our expectations.

“The grant process meant there were tight deadlines, or we’d lose the cash. Procast pulled out all the stops, even filling in paperwork at 9 o’clock at night.

“Most importantly, they also added value for us – pointing out that fall safety equipment might be thousands of pounds cheaper to install while their scaffolding was up.”

Paul Shearin said: “As this site is an airfield, it came with its very specific planning hoops to jump through, such as PV glare reporting, environmental and geographical considerations.

“This meant a lengthy planning process. We worked closely with the client to ensure due diligence was carried out and information successfully submitted to planning.
“Also, the hangar, although fairly new, had to be the subject of structural reporting to ensure the roof could take the load of the new PV system.

“Gaining access to roof also was a challenge itself, given its height, surrounding buildings and surrounding ground. We erected 60 metres of scaffold and a Mansafe system to protect people working at height.

“The Mansafe system will now allow future maintenance to be carried out without the need of a full scaffold.

“This site appears to be of commercial scale but does not have a commercial incoming power supply. The site is fed from single phase, which means we have grid restrictions. To comply with regulations, we had to have export limitations set on the kit but aim to keep as much power onsite as possible.

“All in all, though, it was a pleasure for the entire Procast team to work on.” 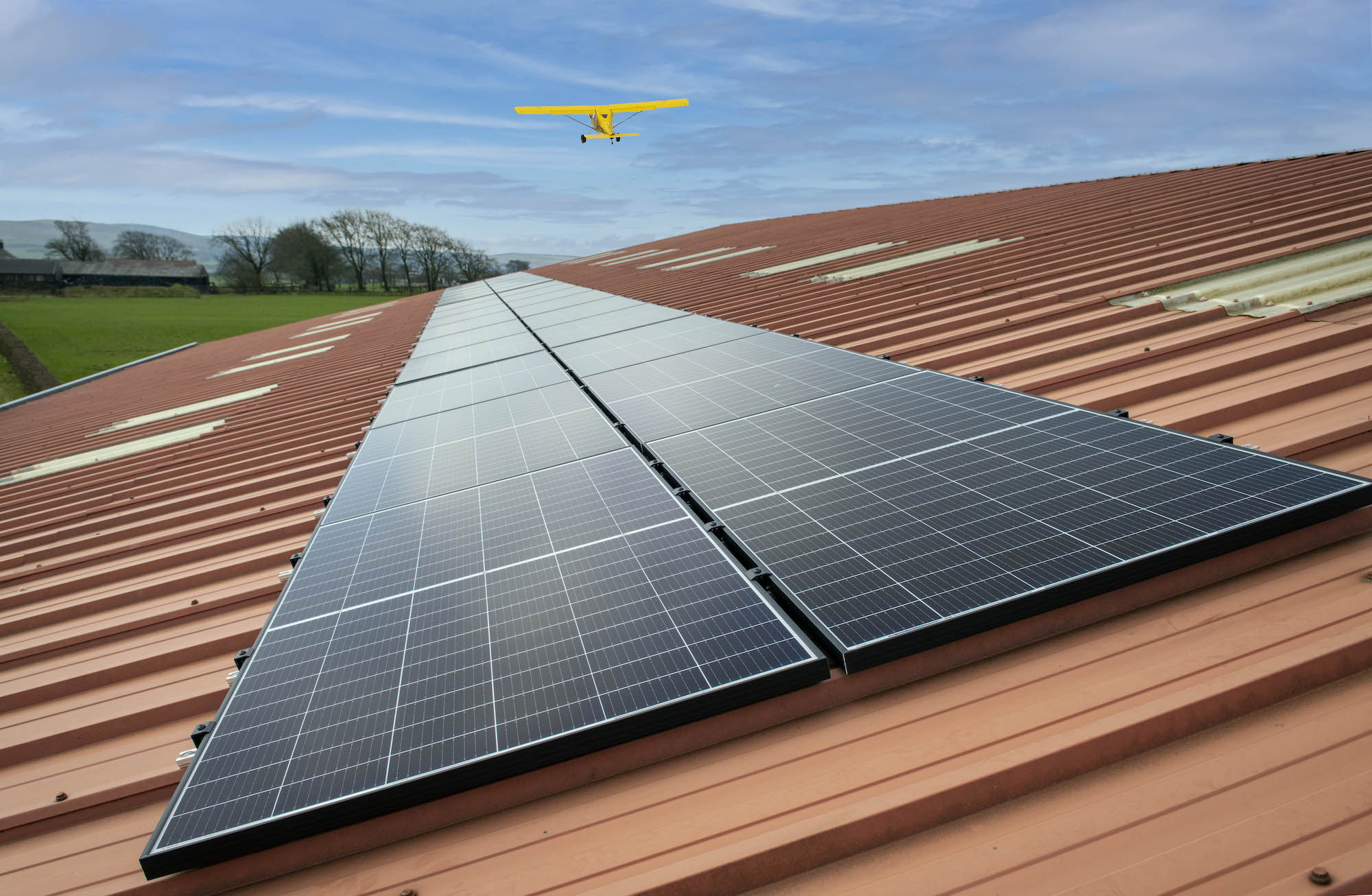 Reid all about it – Conor named Apprentice of the Year >